Dolmabahçe Palace and The Fortress of Europe

Today our group got a look at our second palace in Istanbul and our first fort.  Venturing to a new and exciting part of the city by bus, we got a look at the local fishing sites surrounding the coastal areas of Istanbul, and we spent the day exploring a more local Turkish environment.

Arriving at Dolmabahçe Palace, it was clear that this 19th century site was very different than the very traditional Topkapi palace that we explored this past Sunday. It was immediately apparent to our whole group that the Dolmabahçe Palace had taken its inspiration from European origins. Reminiscent of Versailles, this ornately gated palace was surrounded by lush gardens and beautiful views. Entering the palace, it was clear that many European styles (like Baroque and Rococo) had been mixed together to create this Ottoman Palace. The motives behind this style choice were a topic of discussion among our group for the rest of our day.
Why had the Ottomans felt such a draw towards the European styles during this period? Through discussion and the synthesis of ideas presented in our many readings a few possibilities for this phenomenon came up.  The possibility that the Ottomans were attempting to replicate European styles in the hopes of appearing more European themselves was brought up. Known as the "sick man of Europe" during the latter phases of their decline, the Ottomans undoubtedly attempted to assimilate into the culture that was appearing to overtake them.
Another possibility for the rapid switch from traditional Ottoman to contemporary European styles was the fact that the Ottomans were attempting to restrict the power of the nobility much like in the case of the environment surrounding Versailles in France.
It was also interesting for us to see the German friendship with the Ottoman Empire continue to be visually depicted in the Dolmabahçe Palace.  Many ornate vases and statues adorned the vast halls of the palace, acting as a reminder to the friendship that ended in the Ottoman Empire's entrance into WWI as allies with Germany.
Whether the difference in style between the traditional Topkapi Palace and the Dolmabahçe Palace was one based on style or one based on power, the aesthetic differences between the two were shocking. Instead of the vast, open courtyards and traditional tiled edifices of the Topkapi, the Dolmabahçe stood proud with gold leaf gleaming on every surface and ballrooms containing the largest crystal chandeliers in all of Europe.  Although the consensus is unclear whether the Topkapi or the Dolmabahçe reigned as the favorite among our group, it is certain that each contained a beauty that could only be truly appreciated in person.
Following our visit to the Dolmabahçe Palace, we explored the Fortress of Europe. Being the only Fort in Turkey constructed by the soldiers who would later man it, the Fortress of Europe became the final piece in the Ottomans puzzle of conquering Constantipole (now known as Istanbul). Already having constructed a fort on the other side of Constantinople, the completion of the Fortress of Europe effectively signaled the isolation of Constantinople from its water supply lines and the end of the Byzantine Empire's hold over the city.
Constructed directly before the conquering of Constantinople by the Ottomans in 1453, this fortress has stood for five centuries in the service of Turkey.  Although only requiring 90 days to complete construction, the walls of this fort stood even to protect and defend Turkey up until WWI.
Interestingly enough, this fortress was also build atop the remnants of a Roman amphitheater. With rows of colleseum-like seats sunken into the ground within the fortress's walls, the remnants of this Roman entertainment center fulfills its original purpose today as an outdoor concert venue. 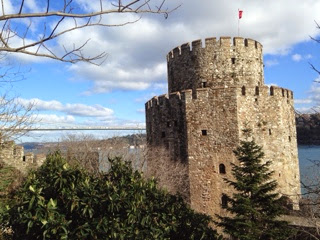 (The view from atop the fortress's highest hill shows the incredible contrast between this centuries-old structure and the modern bridge seen in the background.)
Overall, today's activities presented our group with opportunities to sample the local Turkish food and atmosphere while taking yet another step back into the sites Turkey's past.  The contrast between the Dolmabahçe Palace and the Topkapi Palace presented us with the perfect opportunity to witness the clash between traditional "eastern" and "western" styles that Turkey is so well known for. Similarly the sheer age and significance associated with the Fortress of Europe reminded us of the many historical sites and artifacts that still reside on Turkey's soil that can tell us the story of the nation's intricate past.  So far, a day hasn't passed that our group hasn't visited some of the best historical locations that Turkey has to offer us. 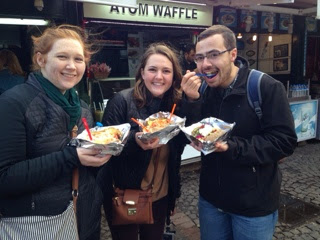 (Victoria, Courtney, and Bear enjoy Kumpari in the Ortakoy neighborhood. Kumpari is a baked potato covered with all types of toppings, such as olives, corn, cabbage, sausage, and yogurt!)