Hagia Sophia x 2 and the Byzantine Mosaics of St. Savior in Chora

Today, January 10th began with a harsh wind and a slight drizzle, which lead to a consistent rain. Our breakfast, revealed a very different view of the Sea of Marmara than yesterday. This view was one of white caps, and sprays rising above the roadside below. Our tour guide, Saba, informed us that the ferries would not be running on water as angry as today’s.

We began our day at St Savior in Chora. It is relatively small and in the midst of a renovation. The ceilings and walls of about two thirds of the interior are covered in mosaics, while one third is covered in painting, all depicting scenes of the life of Mary and Jesus. It was originally a church, with all of the mosaics being made throughout the Byzantine era, however when the Ottomans came into power they converted the then church into a mosque, covering the murals. This is also true of the Hagia Sophia as well as the “Little Hagia Sophia” the other two places we visited.

Next we ventured to the “Little Hagia Sophia”, the building that the Hagia Sophia is thought to be modeled after. It is unique in that it is still a functioning mosque, there is still evidence however of its time as a church. Greek lettering from the byzantine era can be seen surrounding the upper floor and the columns from the original structure still stand. What is truly remarkable is the domes and archways, a marvel of the technology at the time, which has truly withstood the test of time. There are however starch differences from the times this mosque was a church. The place the altar once stood has been replaced with a structure pointing towards mecca. Since, the altar was originally facing due east and mecca stands to the south east of Istanbul, the new structure stands at a slant of about 10 degrees from the wall behind it. Everyone removed their shoes, and the ladies covered their heads while within the sacred space. 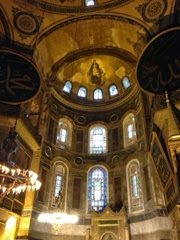 Finally, we walked up the hill, through a bazar to enter the grandeur of the Hagia Sophia. The Hagia Sophia was built as a church, was converted into a mosque during the Ottoman rule and was converted into a museum when Turkey became a secular state. It is not a museum in a traditional sense where there are displays; the building itself is the display. The dome of the building was originally 100 feet by 100 feet, however, due to some structural problems, it has become slightly more ovular. A mural of Mary and Jesus as a child lies high above where the altar once stood, preserved throughout the time the space functioned as a mosque. On either side, one can see large medallions, decorated in Arabic calligraphy. The medallion to the left says Mohammed, the one on the right Allah. It is one of the few places in the world where you can see such a close quartering of Islam and Christianity. The true enormity of this beauty cannot be described through words and pictures alone--it is beyond compare.

Many of the mosaics have been lost due to an idea that permeated throughout the Byzantine Empire from around 730 to around 840. The idea of iconoclasm was that images (especially figural) should not be tolerated because they may lead to idolatry, an idea which is still present within Muslim society. Fortunately, in many locations, the artistry was not lost or destroyed and was instead covered up, with wooden panels in some places and with plaster in others. There were many defenses written for the worship of icons, saying they are imperfect copies, and they represent the future before the events come to pass. Another argument for worshipping God as an image and placing benefactors as well as emperors within the murals themselves, as stated in John of Damascus, is that in the beginning, God created man in His image.

The Byzantines communicated much through their architectural masterpieces. The lack of separation between religion and politics in this great empire was exemplified through these buildings. The Hagia Sophia far surpassed any other church of the time period in size and grandeur, and the use of political figureheads within the art as kneeling before Christ were powerful images representing respect to those of higher authority as well as an attempt to receive favor in the eyes of god. It was widely believed that Istanbul, Constantinople at the time, was a blessed city, blessed by Mary as well as God, and the Hagia Sophia is portrayed in some mosaics as a gift to Christ himself. With this in mind as we venture through the artwork we can see the architecture with a new lens.