On our first morning in Ankara, the capitol city of Turkey, we traveled by bus to the ancient city of Gordion, once the capitol of the Phrygian civilization. The Phrygians were an ancient sea people, most likely from Greece or Macedonia, that arrived in western-central Anatolia (modern Turkey) around 1200 BC. The city of Gordion is surrounded by local mythical and legendary stories that include its founding, the Gordion knot and the Phrygian king known as Midas. Most of what is known of the material culture of the Phrygians is from the excavation sites in the city of Gordion. For the purpose of understanding the cultures and civilizations behind the modern people of Turkey we explored an archaeological museum in a region known as Yassihöyük and also a burial mound believed to be of the legendary King Midas of Phrygia. 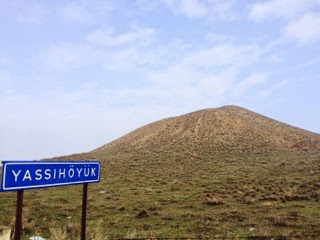 When we arrived in Yassihöyük, we visited the museum which housed hundreds of Phrygian artifacts from excavations in the local region of Gordion known as Kale. These artifacts, which included terra cotta pots, vases, coins, statues and specialized tools, told the story of the Phrygian people throughout their history. Each period was represented by a different display, showing the gradual changes in the style and material of the objects. This evolution clearly defined the influence of the ancient civilizations, such as the Greeks, on the material culture of the Phrygians and vice versa. Much of this has to do with the trade that occurred between the ancient Phrygians and these early civilizations. This alone represents an ancient "crossroad" of cultures between these people groups that allow historians to make important connections. Each was able to build upon the other and grow together with the advancement of each other. 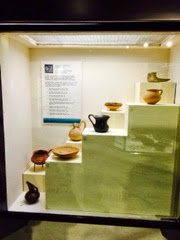 The Hellenistic period during the time of Alexander the Great not only had an influence on the art and architecture of the Phrygians, but also built upon an ancient narrative specific to the capitol of Gordion and it's founding. Local legend says that at one time the ancient Phrygians were without a King. Now the leaders of the kingdom were unsure of who should lead and sought council with an oracle, which decreed the next man to enter the city with an ox-cart should be crowned king. It just so happens that a poor man named Gordios traveled to the city with family and belongings on an ox-cart and on entering the gates of the city, he was declared king. To honor the oracle, he tied the ox-cart to a nearby temple with a knot and prophesied that whomever undid that knot would become a famous king of all Asia. No one could untie it for hundred of years until finally in 333 on his conquest throughout Asia Minor, Alexander the Great wrestled with the knot and when overcome with frustration cut the knot with his sword. From then on, Alexander became a famous ruler of all Asia. Although through conquest, the prophecy was fulfilled.
Now this myth has several different versions, one that suggests Alexander uprooted the peg the knot was tied to and instead "untied" the knot while displaying his intelligence rather than power. Yet another version that was particularly interesting to our group, was one that dated back to the Hittites, a pre-Phrygian civilization. Their legend presents a similar story of the peg and a knot made of carnal wood placed there by a storm god. The connection between these two myths points to the importance of Alexander, linking him to a more classical story. Once again we are at a crossroads of civilizations and an evolution of a story over geographic locations. It also points to the importance of retelling stories and ancient oral narratives. 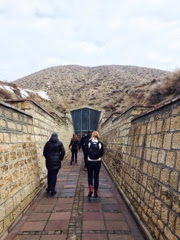 Another site that we visited was across the road from this archaeological museum, known as the "Midas Mound." This is traditionally accredited as a burial mound for the predecessor of King Gordios' son and heir Midas, the same Midas known in legend for his gift of turning what he touched to gold. Yet, there is no way to be certain as Midas (and Gordios) became a common title/name for Phrygian kings. The mound itself is over 50 meters in height and 300 meters in diameter. While the largest, the burial mound is also the richest, containing masses of imported goods, masses of bronze work, inlaid wooden furniture and other artifacts.
Students were allowed to enter the mound through a tunnel to see a wooden tomb structure dating back to at least 600 BC. Although none of the artifacts were actually in the tomb, the monumental significance and architectural advancement of the burial mound spoke for itself. (*Richard Liebhart a current professor at Elon University actually works on this excavation site and has made crucial discoveries for the team*) 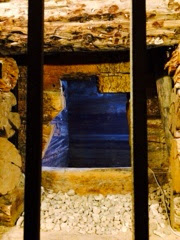 Having already seen the massive mausoleum of the founder of the modern Republic of Turkey, Mustafa Kemal Atatürk, our group was able to make some pretty amazing connections between the two burial sights. Atatürk's mausoleum, as a reference to the Turkish history seems to have built upon the idea of a burial mound. Placed upon an ancient burial mound itself, Atatürk's grave and monument speak to the past, especially elevating the great leadership of this man as he is symbolically compared to the Phrygian kings. Placed on a hill for all to see, remember, and give respect to, both the kings and Atatürk share a crossroads in history that recognizes the importance of honoring one's leaders and commemorating their life through something that no one can choose to ignore.
Posted by Unknown at 1:27 PM