Today we were able to sleep in just a little as our start time was slightly later than usual. At 9:00, after breakfast, we had a class meeting in our hotel in Izmir to discuss what we have seen and learned over the course of our journey,  but especially over the past few days in ancient cities. We discussed how Aphrodisias and Ephesus were given higher status due to the emperor's decision to allow them to build a temple in the emperor's name. We also discussed how stories are used to draw tourists to certain sites as well as how Turkey relates to its ancient societies. All of these subjects help us gain a better understanding of what it means to be Turkish in Turkey.

After this captivating conversation as a class we walked a short distance to Smyrna: an ancient city that is currently being uncovered in Izmir. Work on the site began in the 1950s before which time it was used as a grave yard; the removed headstones can still be seen on the site.The section of Smyrna that is currently uncovered is the Agora or market place. It was built by the Romans in the second century. The unique aspect of this market place is that it consists of two levels. The bottom level was likely used for storage while the upper level served as the shopping center. We were able to explore both sections.

In the bottom level we found some ancient graffiti (a painting of a boat) as well as inscriptions that seem to suggest that there may have been a temple dedicated to the emperor somewhere near this site though nothing has been uncovered to date. We were also able to see first hand how the Romans used arches in order to support the structure of this and many other buildings. 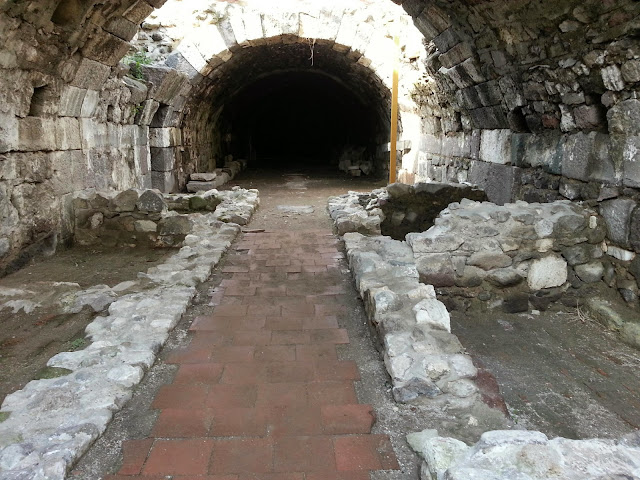 The largest remains of the upper level of the Agora are the columns pictured below. They give us an idea about the grandiose size of the building in ancient times. 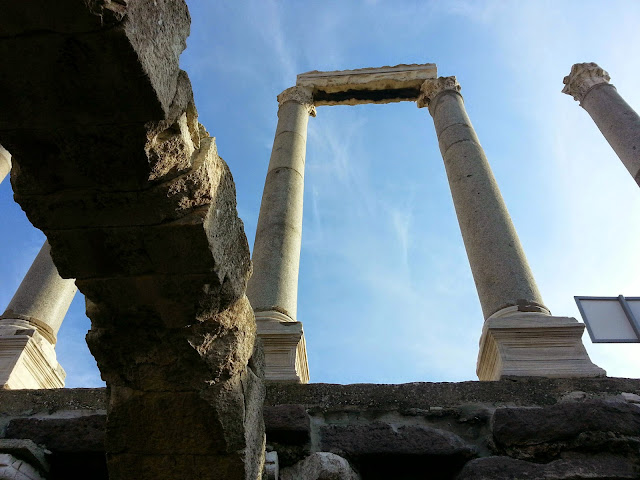 There is also a Basilica in Smyrna that is currently being uncovered. It is believed that the Basilica was built in the sixth century, and it likely functioned as a church.

On this site we were told the story of Saint Polycarp who lived in Smyrna. He was an early Christian who refused to denounce God. For this, he was to be burned at stake, but the fire did not hurt him. He was then stabbed in the heart and became a martyr for Christianity. This story relates back to our class discussion about what draws tourists to these areas; the stories create interest in the site.

As we have seen three different ancient cities over the past three days, we have learned about the religious and cultural diversity of the time. We have seen societies who worship Aphrodite, the Roman emperor,  a mother goddess, a christian god, and many more. We have witnessed the spread of religion and culture through these ancient societies and are able to connect this with modern Turkey which shows both western and middle eastern influences.

Upon leaving Smyrna today we headed back to the hotel to grab our bags and hopped on the bus to the airport. On the way, we drove by what our tour guide called the Turkish version of Mt. Rushmore with the first president of Turkey, Atatürk, carved into the side of the mountain. On the bus ride, we also got to hear some enlightening stories about our tour guide's service in the Turkish military; he was one of the first turkish soldiers to go to NATO. After a short flight we are safely in Istanbul ready to enjoy our last few days in Turkey.